I’ve recently posted a flurry of releases aimed at addressing a couple of user requests / complaints:

The functional new feature is an option on the event editor screen where you can specify a reminder date, which you might typically make a day or two before the date of your event. This is in the same block of parameters as the RSVP deadline and RSVP start date. 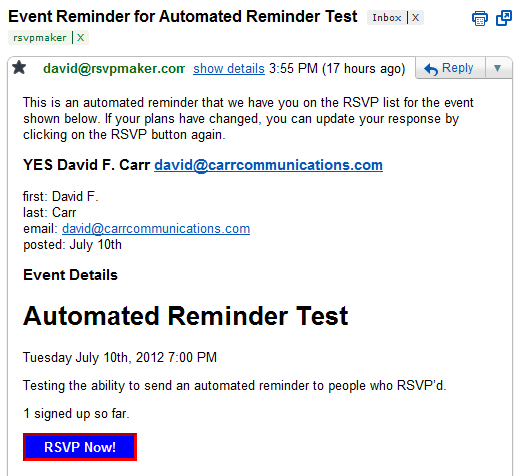 RSVPMaker now creates a pseudo cron job, which by default runs at noon local time and checks to see if any events have set reminders to run that day. If so, it generates an email to be sent to the people on the RSVP list including the details of their RSVP response and a recap of the event. The idea is that you’re reminding them of the details, while also giving them an opportunity to update their RSVP if their plans have changed.

Regarding the scheduling of these reminder messages, note that the plugin can only calculate local time if you’ve set your timezone on the General Settings screen. Also, because the built-in WP cron routine only runs when WordPress is active, it typically runs a little later than the specified time — whenever the next visitor or search engine spider or spambot probe accesses your domain.

If you prefer to set a different time for the  WP cron routine to run and send reminders, you can change it on the RSVPMaker Settings screen.

If you find RSVPMaker valuable, here is one way to show your support. When doing consulting work, I also sometimes ask clients to send me a deposit this way.